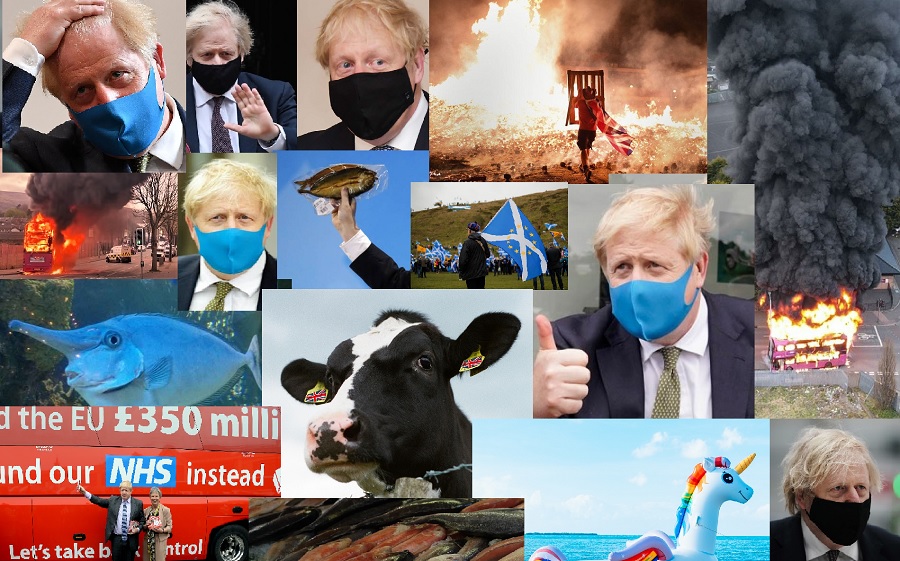 Boris Johnson defined the huge problems faced by Brexit as “teething problems” – setbacks of minor interest and temporary. In fact, Brexit problems are growing by the day and getting from bad to worse.

Overall, Brexit is proving a disaster as largely predicted. Most of “teething problems” are in fact structural, although not yet visible amid pandemic restrictions. But for many important issues it is already clear that problems are not temporary, nor small or easy to solve. And this is happening already within 100 days of Brexit coming into effect.

Here the a few main areas of problems coming directly from Brexit and unavoidable. They are set to be long-lasting and getting worse. Leave campaign has been utterly lying about all of them: fishing industry and export in general, GDP, British immigrants in EU (wrongly called “expats”), Northern Ireland, Scotland and even the survival of the Union, to name just a few of them.

On January 2021, the UK was not prepared to implement Brexit and, yes, teething problems added insult to injury, especially in January. UK’s fishing industry has been hardest hit together with fresh food and livestock export, especially but not confined to January. The rescue plan for fishing industry is inadequate. The government’s “buy british fish” strategy ridicolous and doomed to fail.

After an epochal plunge of 42% for UK’s export in January, a recover in Fabruary has been reported by the ONS. Yet, figures show that export is still substantially lower than pre-Brexit figures (see video at the end of this article). The UK’s GDP shrank a hefty 7.8% compared to pre-Brexit and pre-pandemic levels.

Boris Johnson’s cabinet is trying to sell the partial export recover of February as a “bouncing back”. It is not. Trends confirm a high volatility on monthly basis and a clear year-to-year decline. Larger trade in November and December 2020 confirmed an anticipation for initial months of 2021 due to Brexit.

A large number of SMEs has left the EU market or relocated in EU altogether. The UK’s trade with non-EU countries is in no position to replace huge losses in trade with EU. It is not a teething problem. It is much worse, as it is just starting to set in as a permanent problem triggered by Brexit.

British immigrants to EU – wrongly called “expats” – are paying Brexit very hard. Students and pensioneers are the hardest hit by the limitation of free movement in EU provoked by Brexit. Since January 1st 2021, the UK is a third country for EU and therefore British citizens can stay only 90 days out of 180 in any other country of EU. To stay longer, they have to register as resident which is not an easy task.

Brexit has curbed British citizens’ right for free movement across EU. Ironically, there are still British citizens who voted Leave and think that Brexit has stopped other nationality to come in UK without stopping them going freely in EU. The reality is that EU citizens can move easily across EU while Brittish cannot because UK voted for and implemented Brexit.

This is not at all a teething problem. It is a permanent problem.


Northern Ireland, Scotland, Wales and the dismantlement of United Kingdom

Northern Ireland’s citizens are paying an extra-price to Brexit. This is in the form of increased insecurity in a country plagued by sectarianism and divisions. Brexit created a border between NI and the rest of UK, making divisions within NI worse.

Days of riots – not seen since 23 years – materialized. Riots temporarily stopped only when Prince Philip died to observe mourning days. The situation of Northern Ireland isthe most worrisome non-teething problem for Brexit which is bound to last long, unfortunately. In short, Brexit is threatening the survival of United Kingdom as a whole entity. This cannot be deemed a teething problem at any rate.

While Northern Ireland voted Remain with a substantial margin, Scotland did so with a yet larger majority. Yet, the will of Scotland has not been considered by UK’s government for years. Johnson’s cabinet preferred direct confrontation instead of dialogue. An institutional crisis is in the making and getting worse every week. It might lead to the independence of Scotland. This can be hardly seen as a teething problem and the imminent local elections will have a huge say on the future of the United Kingdom. Even in Wales, a country of the Union that voted Leave, support to independence is advancing at a never experienced rate before Brexit.

Of course, there are many other permanent long-term problems caused by Brexit. The United Kingdom is increasingly isolated within the international diplomatic landscape. The isolation is impacting on all sorts of issues, running from vaccination to extradition, to possible trade wars with EU, to problems within NATO. These are not simple teething problems. These are huge problems set to last for long and caused precisely by Brexit.

In this video an analysis of trade figures up to February 2021.