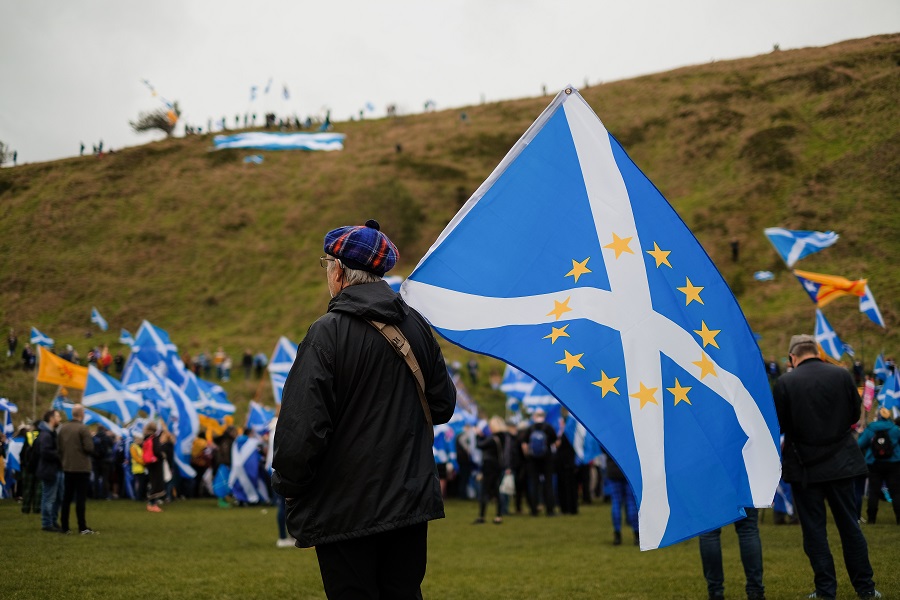 Since January 1st 2021 the process leading to a possible dismemberment of UK entered a new phase. Two articles of major newspapers at the end of 2020 well described the process. One published by The Guardian (here) and another by CNN (here). Both pose the theme of dismemberment right from the title.

After clearance for Nicola Sturgeon, Katy Balls wrote again on The Guardian: “The Conservatives hoped the threat of Scottish independence was receding. Now they must work to keep the UK intact.”

In fact, a sort of dismemberment process is already going on. The agreements signed in extremis in the last days of 2020 established that – de facto – Northern Ireland (NI) and Gibraltar remain in the European economic area. This means that the actual border between the EU and the UK already crosses the UK on Irish Sea. Gibraltar is negotiating, but it looks more and more integrated with Spain and EU.

Northern Ireland, one of the four member countries of the United Kingdom, effectively becomes a country that is part of the European Union in all but the name and representation in the European Parliament. To be clear, Northern Irish can freely enter and leave the European Union, as well as their goods and services. Instead, this is no longer possible for the rest of UK and British people.

The Northern Ireland economy can benefit and it is easy to predict that those who can afford it (individually and as a business) will move from the rest of the UK to Northern Ireland – or elsewhere – to enjoy these benefits. Controls on goods between NI to the rest of the United Kingdom pushes NI further into integration with EU’s economic system.


Actually, Northern Ireland’s membership of the EU customs bloc strengthens the hypothesis of reuniting it in a not-too-distant future with the Republic of Ireland, as the two economies continue to integrate reinforcing each other and taste for Union weakens – despite blackmailing from armed factions.

In fact, ties and economic interests between NI and the rest of the UK are inevitably weakening, having to go through the new borders and red tape caused by Brexit. Latest developments, with UK’s unilateral suspensions of trade deal with EU – on Irish Sea – might solve local problems in the short term. Yet, it is bound to worsens the overall picture in the medium-long term.

All of the above is aggravated by a lack of agreement between London and Brussels in the strategic sector of services, which represents the largest sector in developed economies.


Independence of Scotland and dismemberment of UK

Regional elections are scheduled for May 2021 in Scotland: one of the member countries of the United Kingdom that voted, like Northern Ireland, clearly against Brexit.

Today, a few weeks before the Scottish vote in May, the Scottish National Party (SNP) keeps raising the request of another referendum to be repeated: the independence of Scotland.

The latest polls of 2020 showed “Yes” to independence around 52%, “No” around 38% and the remaining 10% undecided. For a while in February-March 2021, pro-independence went down a bit. Yet, independence is once more leading polls. As Nicola Sturgeon was cleared from allegations of misleading the Parliament, the Yes can grow more. Indeed, Scottish independence can win, should a referendum be held.

Within the end of 2021, Scotland could therefore leave the United Kingdom and proceed with an application for admission to the European Union.

During the transition period, and particularly in recent months, Scottish members of the UK Parliament have repeatedly tried to talk with conservative governments about Scotland’s needs and rights.  That is, to considering the opinion of millions who voted remain and the need to reach an agreement as open as possible with the EU.

But their claims and proposals have often been the subject of derision by the government and particularly by Johnson. A UK-EU deal is now signed, but the damage of Brexit remains and is gigantic.

It would be even worse if Boris Johnson’s government keep opposing the holding of a referendum for the independence of Scotland. This eventuality would plunge UK into a much worse political and international crisis

In addition, the majority of the conservative party has been accepting the risk of dismemberment of the United Kingdom in order to implement Brexit. This was revealed by a survey (here) by youtrend in June 2019.

Today the situation does not seem to have changed, quite the contrary. From the declarations of the leaders of the conservatives, it is clear that there is a desire for a confrontation with Scotland. The weak case against Nicola Sturgeon, widely pumped-up by Tory press, demonstrated it once more.

Meanwhile, Wales is growing pro-independence too.