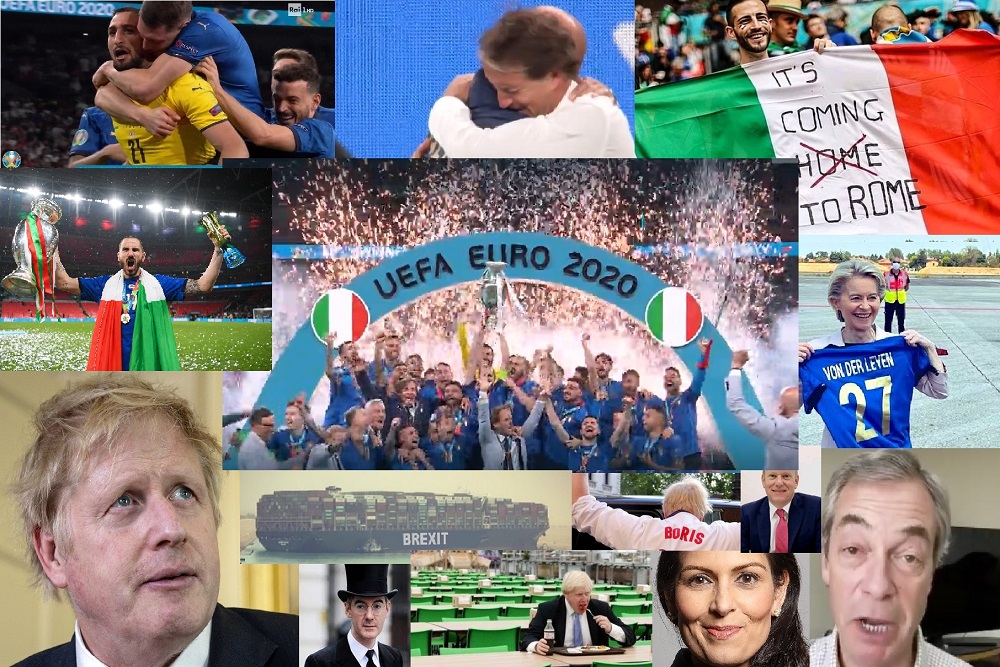 Even a victory of England in the Euro 2020 would have not spelled much benefit for the UK. The success would have been soon shadowed by a long night of a hallucinating party, drowned in beer, violence and xenophobia. Concrete advantages in real life would have been nil or negative.


After all, even for English people, the victory of Italy in this Euro 2020 can be cheered with hope and blessing.

Sure, a fantastic football team of England lost one step before winning. But this team did extremely well. It well deserved an important second place – beaten just with penalties by the best team of the tournament in on all respects. Winners and losers.

At the dawn of the Euro 2021 final, England’s supporters were sure to win. They clearly forgot about the difference in technique and experience between Italy and England.

Before yesterday, Italy had already played three Euro finals, winning one. This was the fourth final since the tournament existed. England never set on this stage before yesterday.

England’s football team for Euro 2020 lost, but it has been almost perfect. The real losers of this sport event are to be found elsewhere, many of them outside the pitch.

The real winners are Europe and all Europeans – including a large chunk of British citizens – who have been supporting Italy as their European champions against Brexit’s England.


Winners on the pitch: a stunning Italian team

No questions, the main winners are the Italian coach Mr Roberto Mancini and his more-than-fantastic team. From the lowest level ever – an exclusion from the World Cup final phase just three years ago – Roberto Mancini has been able to build a young, balanced, powerful Italian football team capable of resurrection from the ashes of that humiliating exclusion.


Among the Italian players, all of them remarkable, the best in the final have been those playing in the defence role. Shocked by the cold shower of a starting goal scored by England in just two minutes, the Italian defence – piloted by captain Giorgio Chiellini and Leonardo Bonucci – has been able to rekindle Italy’s superiority.

The Italian defence gave a powerful thrust to the rest of the team. This defence has been capable of equalizing with Bonucci, the central defender, himself. He then excelled when taking his penalty.

Yet the hero, in the end, has been Italy’s goalkeeper Gianluigi Donnarumma. He is currently the best football goalkeeper in the world. He blocked two of the five opponents’ penalties, well above his stunning average of one block out of three penalties.

But this victory is certainly the result of a specific bundle of experience and technique, smartness and fresh energy. It is the result of extreme humility and cohesion, tactical preparation and the right choices.

No question, Roberto Mancini (pictured in a viral meme) is a near magician in all respects: the master, the director, the main winner of Euro 2020 – a King of Football, if not a Qeeen.

Never before there have been so many different people supporting one of the two teams in an UEFA’s Euro or FIFA’s World Cup final. Italy was backed by virtually every European, even by football super-rivals such as French, Germans and Spaniards.


At first, Europeans did not bother to politicize the event. The match was politicized in England. Europe, and especially EU, accepted the challenge – and won.

The final, England vs Italy, was perceived as an ultimate struggle between the fighting champions of Brexit England and the remaining European block. England might have received the sympathies of the smaller contender, acting as a David against Goliath. Yet, the outrageous behaviour of some English supporters pulled even Scandinavians, and especially Danes, to the Italian side – and so, too, for Belgians, Slovaks, Romanians, Bulgarians, Slovenian, Croatians and so on.

Italy’s victory has therefore generated an even more united Europe, well beyond EU borders. And it became a victory for the EU itself.


The losers on all fields: Johnson & Co., Brexit and Brexiteers

Boris Johnson and his cabinet have nothing to do with football. They could have watered-down tensions and avoided a political meaning for the Euro 2020 Final.

Yet, they decided to push their nationalistic and xenophobic instincts. They pushed harder on the nationalistic message that they had already praised for so long. Brexiteers launched a political propaganda, transforming a sport event into a national question of life or death.

And they have been defeated. Defeated in the worst possible way: at the last penalty.

The main loser of all this is Boris Johnson. The real losers are Brexiteers, English chauvinists and racists – even those who are not English at all, even the Italian racists. And, as true losers, they lashed out in their rage and their violent rants against outstanding English players and foreigners.

It is therefore time to reckon that Boris’ decline started yesterday night. He self-inflicted yet another loss. He is the real loser together with Nigel Farage, Jacob Rees Mogg, Priti Pattel and all these politicians who added yet another Brexit defeat to their unenviable records of economic, social, political and institutional carnage.

The losers are all nationalists, extremists, Italexiteers, Trumpists, neo-fascists all over the world who would have preferred a xenophobic and racist Brexiteers’ win.

An English victory would not have changed the extent of the self-inflicted ordeal imposed by Brexit. But it would have prolonged it.

For these reasons, British people should actually be happy about Italy’s – and European – victory. An English victory in the sport arena would have maybe made life happier for a few hours. But, being politically exploited by Brexiteers and chauvinists, it would have made life worse for all British people for years to come.

A Euro football final might not be so important. It is not important for everyday life. Yet this one is politically and concretely symbolic.

It is time the UK really leaves its current path and heads for a real change. The UK should leave a backward Brexit decline and come back to the enlightened path of history: re-joining EU and embracing the possibility of a bright future together.