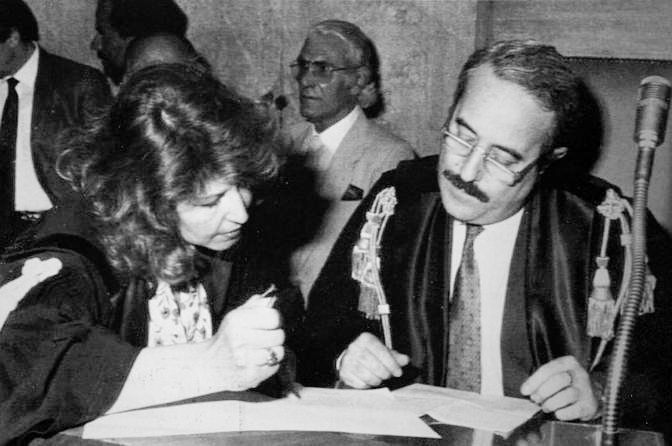 Today is the 29th anniversary of judge Giovanni Falcone death, assasinated in the Capaci bombing of May 23th 1992. A date of mourning and remembering to strengthen the anti-mafia movement in Sicily and through all Italy.


I have always appreciated anti-mafia judge Giovanni Falcone’s competence, precision, seriousness. And then the tenacity, the stubbornness and the institutional spirit. The mafia killed him precisely for these characteristics. Because for the mafia he was an enemy, he was “the” enemy. Falcone was the anti-mafia man who was bringing Sicilian mafia to its knees.

As Falcone demonstrated long ago, the Sicilian mafia does not kill by chance. It rarely carries out symbolic actions. In 99% of cases, it hits people fighting mafia with concrete results: those who can put mafia’s economy and power systems in crisis.

Today there are few, or perhaps none, at Falcone’s level. Instead, there are many braggart, false heroes, media figures. Nothing to do with Falcone’s sobriety and shrewdness.

Incredibly, Falcone was a target for thousands attacks from media and thousands of ill-conceived controversies until the eve of his death in the terrible Capaci bombing (strage di Capaci), Sicily on May 23th 1992. There he died together with his wife, and three policemen escorting him, in a huge bombing attack on the highway between Palermo’s airport and the city.

Was  he – and sometime is still – a target from media for his non-glamour method? Arguably.

But, Sicilian anti-mafia judge Giovanni Falcone was effective precisely because of his caution and prudence in conducting investigations reaching-out on all fields: organized crime, racketing, financial crimes, political connections, etc. All this was implemented by Falcone without glamour but with stubborn, tangible, prosecution acts. His style of work should be a guide and an example in today’s anti-mafia’s movement and actions.

And it is. Because, after his death and that of judge Paolo Borsellino, Sicilian society produced an anti-mafia movement which is still going on nowadays. The current anti-mafia movement in Sicily is much more pervasive and include thousands of activists working with Falcone’s style: practical and cultural effectiveness to win the struggle between legal institutions and criminal organizations. Nowadays institutional forces, police and magistrature, are now much more integrated with the Sicilian civil society to decisively enhance the rule of law in Sicily.


Learning by his words. And not only in Sicily

On the day we remember him (May 23) with nostalgia, affection, pain and regret, the real anti-mafia continues to follow Falcone’s method and example, leaving behind rhetoric, crowded stages, easy proclamations.

For this reason, it is useful to quote a sentence by Giovanni Falcone himself that is not remembered as often as it should:

“I believe it is necessary to realize that this is not a personal struggle between us and the mafia. If it were understood that this must be a commitment – extraordinary in the ordinary – of everyone towards a phenomenon that is unworthy of a civilized country, things would certainly be much better.” (*)

On cover, Giovanni Falcone with his wife Francesca Morvillo, also a magistrate and murdered on May 23, 1992 in the Capaci massacre together with escort men Vito Schifani, Rocco Dicillo and Antonio Montinaro.

On text, most famous photo of Judges Falcone and Borsellino by Tony Gentile. Here the story of this photo (in Italian).

Translation from Italian and editing by Gabriele Bonafede. This is a re-editing of a n article published by Maredolce in 2018. Original article in Italian here.