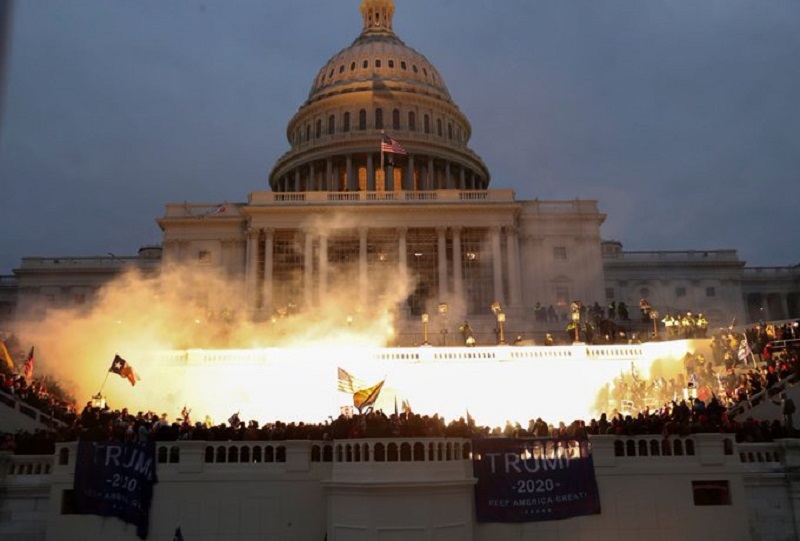 A total of 35 Senate Republicans voted against a bipartisan Commission on Capitol attack of January 6, 2021. With the US Senate evenly split 50-50, Democrats needed the support of at least 10 Republicans to move to the Commission bill. This is, because Republicans invoked the filibuster. The episode has sparked new debate over changing the rules on filibuster and lower the threshold to 51 votes to take up legislation.

After the vote, senator Elizabeth Warren (D) launched on Twitter: “If Senate Republicans can block an independent commission investigating a deadly armed attack on the Capitol because it might hurt their poll numbers with insurrectionists, then something is badly wrong with the Senate. We must get rid of the filibuster to protect our democracy.”

The proposal passed the vote in The House of Representatives. Yet, majority of Senate Republicans killed the bill thus showing willingness to hide the truth about a deadly insurrection where high-ranked GOP members’ involvement sounds now ever more plausible. Now a Democratic Party-led House Special Committee is likely to be in place.


A shameful vote for Republicans: blocking a bipartisan Commission on Capitol attack

The Senate majority leader, Chuck Schumer, condemned Republican colleagues for blocking the  bipartisan Commission on a clearly institutional issue – discovering the truth on a deadly Capitol attack, which has been close to be much deadlier. In fact, Trumpist rioters have been storming the Capitol while threatening death to Mike Pence and Nancy Pelosi, the two highest US institutional positions.

“Shame on the Republican party for trying to sweep the horrors of that day under the rug because they’re afraid of Donald Trump,” Schumer said in a Senate floor speech immediately after the vote.

The House speaker, Nancy Pelosi, too, defined the vote on the Commission bill as shameful for Republicans, recalling that this vote risks to make the country less safe. She said that House Committees, under Democratic leadership would continue to investigate the attack. “Democrats will proceed to find the truth,” she confirmed.

The six Republicans who voted for the commission to proceed are Bill Cassidy of Louisiana, Susan Collins of Maine, Mitt Romney of Utah, Lisa Murkowski of Alaska, Ben Sasse of Nebraska and Rob Portman of Ohio.

A bipartisan Commission to investigate the attacks of January 6 should not be controversial. It makes wondering why GOP senators voted against it. The only answer is that GOP senators voted to hide truth on a deadly and unprecedented Capitol attack.

This is the list of 35 senators who voted against, as reported by the US Senate web page (here).

Among them, many have been caught in expression of support to rioters, as senator Hawley who raised a hand in encouraging sign to the mob, outside the Capitol on the morning of January 6th, just before the deadly attack. Matt Gaetz, a Florida congressman under investigation over sex trafficking allegations appeared to incite supporters to take up arms. He also said “We have a second amendment in this country, and I think we have an obligation to use it”. The second Amendment on US Constitution guarantees right of holding weapons. Gaetz apparently considers it a right to use weapons against US institutions.

David Leavitt commented on twitter “Mitch McConnell and the Senate Republicans blocked the investigation of the Jan 6 insurrection because they’re fucking complicit. No other explanation. They don’t want to do something, fearful of what will be found, that they’ll go to jail themselves. “


The Lincoln Project “January 6th was an inside job”

Fred Wellman, Executive Director of the Lincoln Project,  commented on Twitter in much harsher terms: “This is sick. The cowards didn’t even stay for the vote. The GOP is dead. It’s a hollow, empty, broken shell with no morals. They only care about keeping power and will destroy our democracy to do it. We have to dismantle it down to the ground and salt the Earth where it stood.”

He is not alone in using tough wording. Billy Baldwin, twitted: “On this Memorial Day please remember our heroes who made the ultimate sacrifice defending our democracy. Also remember the GOP cowards who threaten our democracy by voting to block a bipartisan, independent investigation into the January 6th insurrection. #KillTheFilibuster”.

The Lincoln Project released a video on social media, claiming that “January 6th was an inside job”. Here the video on youtube.

On Thursday, before the vote took place, Biden had told reporters, “I can’t imagine anyone voting against establishing a commission on the greatest assault since the Civil War on the Capitol.”

After the disappointing vote, White House deputy press secretary Karine Jean-Pierre said: “Members of the Senate aren’t sent to Washington to rubber stamp any party’s views. They swear an oath to support and defend the Constitution and today unfortunately they failed to do that,”.

According to media ad press releases, Jean-Pierre did not say whether Biden is considering forming a presidential commission or not. However, she reported that the US President believes an investigation should be done anyway in a bipartisan manner.