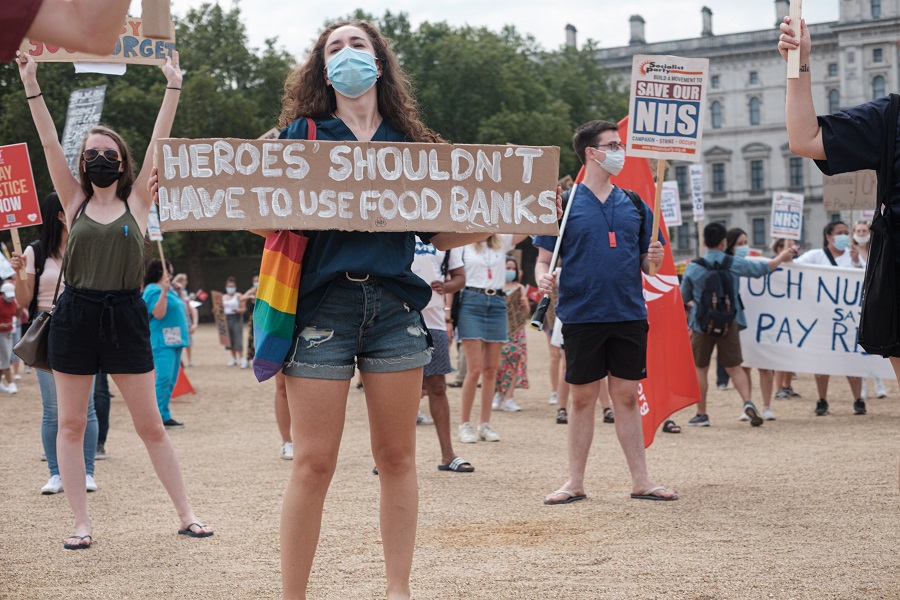 In the UK the only real heroes in this pandemic have been NHS employees. All of them have relentlessly worked without a pay rise and well beyond normal working time, often in extreme conditions.


The NHS saved lives with a heroic dedication, and paying a high price in terms of death toll too. They saved PM Boris Johnson’s life, too, when he fell ill from Covid and received an abundance of care.

Yet, the very same Tory government is proving to be less than thankful as well as being incompetent. It is proposing a 1% pay rise with inflation currently at 2.1% which is a prospective pay cut. However the mismanagement of the health sector by Johnson’s cabinet does not stop there.

After a shameful occasion when the Health Minister resigned, the new Health secretary, Sajid Javid, is due to propose a bill to curb the NHS’ role in health care.

So in practice, the Tory government is undermining and disregarding the NHS, adding insult to injury.


NHS, a pay cut in real terms: first the insult, then the injury

As mentioned above, with inflation currently running at 2.1%, a pay rise of 1% is a pay cut in itself. But this is not the whole story. Analysing data from Nuffield Trust, a pay rise for employees at NHS is long overdue.

“In real terms, adjusted for inflation, average NHS pay remains below where it was in 2010. For most groups, this drop happened largely during the period of public sector austerity up to about 2017, with some recovery after that.


Nurses, for example, reached a low point of a 9% real-terms drop in pay from 2010 to 2017: their average pay now is around 5% less than a decade ago”, Nuffield Trust reported.

Nurses have also lost their bursary and as a result have much higher costs in obtaining their qualifications.  The situation is even worse for doctors and other employees (see picture).

It represents an heavy pay cut in real terms, especially when compared to the titanic effort of NHS’ employers to cope with Covid pandemic.

Indeed, it has the flavor of an insult before the subsequent injury:  a pay cut to NHS’ employees before a cut to NHS’ independent management.


The injury: UK government to reduce the NHS’ role on health sector

No less important is the injury the UK government is willing to inflict on the NHS in terms of real management power. Faced with a labour shortage caused by Brexit – the mother of all the UK’s self-inflicted injuries – the UK government is planning to curb the strategic role of NHS’ managers. The new Health secretary has been asked by the PM to present a reform plan where one of the main features is to provide more power to Minister and less to NHS’ general managers and local managers.

This will involve even strategic decisions regarding infrastructures and labour force decisions. Thus, adding more injury to insult amid the dramatic labour shortage, in part caused by low-pay and a lack of immigrants willing to work in NHS  –  in turn due to Brexit and an unwelcoming Home Office. Additionally, the Tory government’s plans arrive at a time of an appalling record in managing multiple pandemic waves.

During this pandemic, Johnsons’ cabinet has demonstrated itself, on multiple occasions, to be utterly incompetent and extremely damaging when it comes to the health sector. Fortunately, the NHS succeeded – with hard work – in saving many lives which were otherwise doomed by the government’s incompetence and lassitude. Typically, the government is promoting its own power and diminishing the NHS’ role in strategic and key matters with these reforms.


Medals are welcome, but you cannot eat them

Medals, in this case, seem too miserly a method to reward the NHS’ real efforts – if not followed by other, much more important, provisions.

“It has been an extremely challenging year for the NHS and the country as a whole, but also a year of hope.

“As the NHS turns 73 on Monday 5 July, and on the day that the Queen will award the George Cross to the National Health Services of the UK, … the opportunity to celebrate the achievements of one of the nation’s most loved institutions, to appreciate the vital role the service plays in our lives, and to recognise and thank the extraordinary NHS staff – who are there to guide, support and care for us, day in, day out”.

This is the message on the NHS website commemorating the 73rd birthday  with the award of the George Cross by her Majesty Queen Elizabeth. It is a welcome and well-deserved honorific gesture. Yet, a pay rise and a more rational management of health sector from the government would help much more.

Medals are the type of rewards taken in communist dictatorships instead of more concrete measures. This is more than ironic, in a UK governed by Tories.