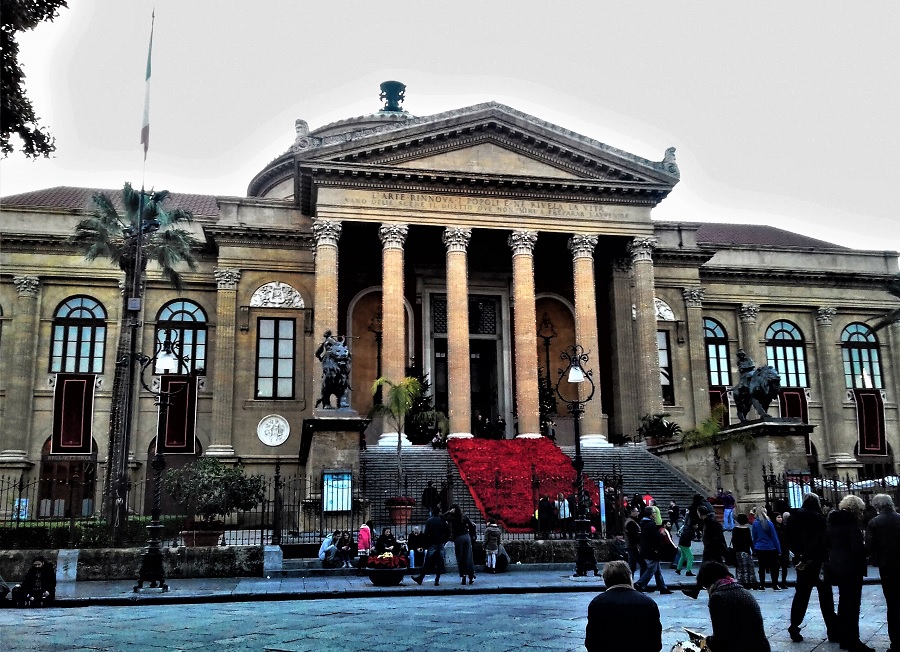 Every Palermitan is proud of it. Every tourist is proud of a photo or a selfie in Piazza Giuseppe Verdi, in front of that stairway and that colonnade, those lions welcoming before a neoclassical entrance. And then the splendor of the internal spaces, the decorations, the setting, the grandeur.

An excellence that has established itself in recent years under the leadership of Francesco Giambrone, general manager appointed by Palermo’s mayor, Leoluca Orlando. An excellence becoming more and more visible, not only in the specific world of opera and in tours around the world, but also as a presence and memory for anyone who passes by Palermo. Above all in the quality and “grip” of the shows on public, critics and artists.


The Massimo Theater – Teatro Massimo – is one of the most acclaimed icons of Palermo. Perhaps the most acclaimed, even more than other, stupendous, monuments. With an amazing path on the rise, if you consider that until a few years ago it languished closed for endless restorations.

Countless great artists have performed at the Teatro Massimo in Palermo over the years. And even with physical closure due to the Covid pandemic, it continued to get interest, performance, streaming successes.

A continuation of Teatro Massimo’s standing thanks to the eclectic and innovative work of the new conductor since 2020, Omer Meir Wellber, and the recently appointed artistic director Marco Betta.


Teatro Massimo between symbiosis and contradictions: a sense for Palermo

Palermo and the Teatro Massimo have a relationship of heterogeneous symbiosis. Of mutual pride, of course, but also of surprise and contrast. Every time you pass by there, in front of the Teatro Massimo, you look at it, imagine it inside and out, go up the entire building and imagine the panorama of Palermo from up there.

Landscape that many have seen even physically climbing it, as it is possible to get to the top with a tourist guide. And left stunned by the same sight stunning Wolfgang Goethe time ago: Palermo and her royal posture on a Mediterranean gulf made of sea, rocks and vegetation, constantly transformed by the winds of human history.

By looking at, and from, Teatro Massimo you get a sense of Palermo in the matter of a few seconds. You feel, somehow, in the navel of the world.

Even if that world, that of Palermo, remains contradictory and with unhappy patches in its large holes: from “Zen” to the other abandoned suburbs, from the dirty and torn neighborhoods a few steps from Teatro Massimo, to the desperation of epochal emigrations that bled a city nevertheless inert and parasitic on many accounts and too many economic sectors.


Palermo and The Leopard

Palermo and the Teatro Massimo have, in some ways, a relationship similar to that between Palermo and The Leopard. A remaining grandeur of ancient nobility, elevating itself thanks to the wisdom of art, literature, music.

“Vain in the scenes is the delight, where it does not serve to prepare the future”, is written right on the pediment of the Theater. Yes, sometime the delight of the Palermitan elite seems to be in vain for a premiere of the Massimo theater. Because the city suffers, struggles in the daily crises and lacerations. It does not take off, on the contrary, it staggers.

But Palermo does not renounce to be mirrored in that internal and external Foyer of the monumental backdrop of the center-of-the city center. Navel of the Mediterranean, navel to itself, navel to history even before Greeks and Roman times.

It happens that a new conductor was appointed in 2020. He is eclectic as Palermo. He is Mediterranean and Central European as well, reminding the very core of Palermo’s grandeur during the reign of Emperor Frederick von Hohenstaufen, Stupor Mundi.

Wellber is Israeli, speaks German, Hebrew, Italian, English, Aramaic. Historic languages of Palermo and Sicily, as Jewish and Mediterranean history is too part of Palermo’s history, together with German and British cultures. Not surprisingly, Wellber has a special relationship with his adoptive city.

Thus, a new video with title “Wellber’s sense for Palermo” will be available online starting tomorrow on the webTV of the Teatro Massimo. It is a portrait-interview of the Israeli conductor Omer Meir Wellber who has been the musical guide of the Teatro Massimo of Palermo since January 2020.

Wellber has been recently awarded by Italian music critics (Abbiati 2020) for having been able to reinterpret his role in an innovative way. In the special show “Wellber’s sense for Palermo” he will talk with the journalist and director of the WebTv of the Teatro Massimo, Gery Palazzotto, starting from a word that reflects the torments and perspectives of current times: hope.

The story of Wellber’s relationship with Palermo and Palermitans will unfold in a streaming musical movie dense of facts and inspiration. There will be themes depicting Palermo’s recent history and her transformed soul, running from the Mafia’s real estate operations ravaging Palermo’s expansion of 40-50 years ago, to the sociability of Sicilian people.


A “Sense for Palermo”. The Teatro Massimo and Omer Meir Wellber

Mr Palazzotto and Mr Wellber will remind about Palermo’s dark moments – such as the killing of anti-mafia’s heroes, judges Falcone and Borsellino (whose 30th anniversary is currently occurring) – as well as brighter developments. They will talk about Palermo’s recipe for always having a vibrant cultural landscape fostered by a great living theater, still open to contemporary life and rooted in the city – Teatro Massimo itself.

The result is a photography of what we are today, surviving the darkness of the pandemic thanks to the innovation of artistic languages ​​and technology – and perhaps also a happy projection of what the theater wants to become.

Videos of the many works directed by Wellber at the Teatro Massimo will contribute to the film to highlight the profile of his artistic personality. The tune will here developed more explicitly on Wellber’s contribution to Palermo’s and the European cultural life, always in search of new languages.

From Don Giovanni, who saw him reinvent recitatives on the fortepiano with creativity, to the passage from the podium – for a fragment of Wagner’s Tristan und Isolde – to the accordion interpretation for the inauguration of 2021 with Il crepuscolo dei figli. From the cadences of Mozart’s concert for piano and orchestra K 414 entrusted to jazz, klezmer and Arabic improvisations to Verdi’s Requiem; and again, from a magnificent Ernani to the staging of the commission to Ella Milch Sheriff Der ewige Fremde. Theater for Wellber “is a living laboratory and not a museum”.

On demand on www.teatromassimo.it . (Video is in Italian language, no subtitles).

A Sense for Palermo, trailer: https://drive.google.com/file/d/1joHD3C6DbGP3dTYuoknmS6oMqFgEIrZb/view.