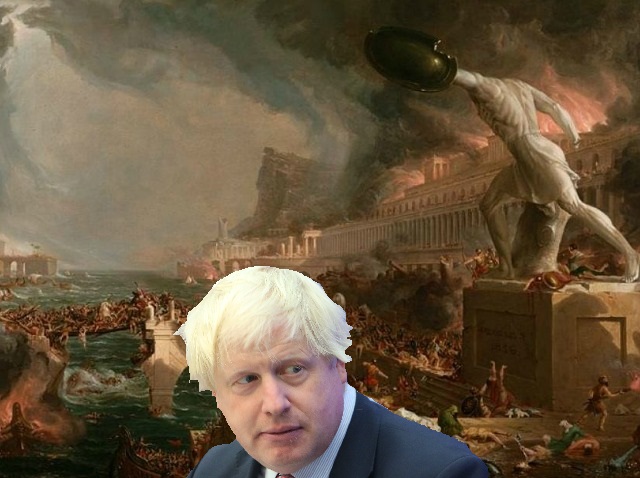 When the British historian Edward Gibbon  wrote the great work “The History of the Decline and Fall of the Roman Empire”, the British Empire was on the rise. It was in the second half of the eighteenth century and, once the Napoleonic wars were won, London would have imposed a “Pax Britannica” on the whole world for an entire century.


The British Empire’s peak was reached and maintained thanks to strong belief on the benefits of free trade, albeit supported by military force when – and where – necessary. It was much larger and more extensive than Roman Empire. It clearly benefited from global trade routes, in turn facilitated by a global peace that lasted throughout most of nineteenth century, barring local or limited wars.

Gibbon could not have imagined how long the British Empire would last. Today we know that it no longer exists. With Boris Johnson’s victory of December 2019 and current implementation of Brexit it looks like we have reached the ending credits of a colossal history movie. The blond Boris resembles to a Nordic barbarian chieftain of the V century AD. From a cynical foreigner’s perspective, he looks like an Alaric plundering an equally barbarized ancient Rome.

The causes of the decline and fall of the Roman Empire were many. Among those indicated by Gibbon in his vast work, origins of fall are similar to those we find for the final phase of the British Empire. That is, the decline of the political class and the denial of the same values ​​and virtues that had made possible the rise in previous centuries.


The British Empire had a first shock with the First World War. A war that undermined international trade for over four years and especially between Great Britain and Europe. That trade was one of the foundations of British power. Not surprisingly, that monstrous war has been sometimes called “The Suicide of Europe”. It was a suicide for the British Empire as well, albeit less evident and at the moment of its apogee in terms of physical size.

Autarchy between the two wars and World War II did the rest, allowing for a slow decline of British Empire over the course of a few decades. It eventually became the UK with a loose leading role in the British Commonwealth.

Since the last post-war period, the United Kingdom has nevertheless continued to benefit from free trade, and from an increasingly accelerated globalization. Above all, UK benefited from the economic and cultural relations with its own continent: Europe. By strengthening these relations in a common design, sometimes reluctantly, the UK continued to exist – not anymore as a hegemonic “regulator” of the European continent and international seas, but as an equal and crucial partner.


By leaving the European political and cultural context with Brexit, the United Kingdom – heir of the British Empire – is writing today the last page of its long history: the final fall.

In fact, UK risks disappearing as a united country, or at least being dismembered into smaller states. Scotland, Northern Ireland – and perhaps even Wales – could go on their own within a few years or months. In any case, UK risks weighting much less than before on the international landscape. A nation that could become medium-sized and “peripheral”, encompassing only a portion of its main geographical island.

As mentioned, the reasons for the decline and fall of British Empire are in part similar to those affecting the Roman Empire. By detaching itself from the European Union, the United Kingdom is in fact severing its own essential lines of force that had created it: free trade – especially with the most important partners. The European Union, in fact, represented 50% of British trade. This is difficult to replace by trade with far more distant continents.


In addition, today’s Conservatives led by Johnson, have abandoned the very foundations of ancient grandeur. They have abandoned their founding values and principles. That is, principles ranging from a free and independent press to an open economic and social environment, to free initiative and reduction of red tape. UK has been moving from an independent Parliament with a strong democratic inspiration, to a “closed” one where political discussion is dominated by a party rejecting its own philosophies. That is, a regression similar to the taunted GOP in US: self-destroyed in its quest to please Trump’s mobs.

The Brexit choice, unequivocally sanctioned by the December 2019 elections, has been particularly self-defeating for UK as a whole. It can be seen as the final chapter in the decline and fall of an empire that many British think is still existing. And today, after a year from those elections, self-destructing mechanisms show their might at their highest.

The main reason for Brexiteers supporting Brexit at all costs – even without a trade agreement with the EU – is precisely that boastfully and doomed project: rekindling an Empire that no longer exists.

Brexit has won with the conviction that a non-existent British Empire is still powerful and decisive. Reality is that UK is now only an ever-smaller piece of a world that is currently far more powerful and decisive elsewhere. Starting with the European Union itself, much larger and economically more powerful than the wreckage of the British Empire – which has now fallen under the blows of new barbarians: real enemies inside and outside the United Kingdom.

Brexiteers are finally reinventing the wheel. An overview from Italy

… and also articles tagged BREXIT and/or UNITED KINGDOM, or UK