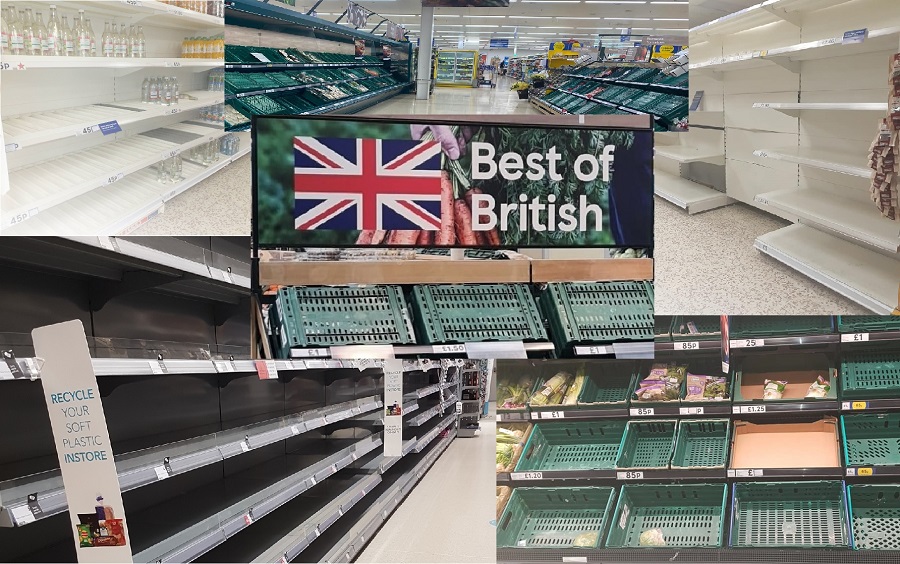 Inflation in UK is now at 3.0%, the ONS stated, a ten year record. As we predicted seven weeks ago (here), inflation is rising while GDP is slowing down. The “benefits” of Brexit are destroying UK.


The UK government and related media – including the BBC – are still blaming shortages on the pandemic rather than Brexit.

They refer to an imaginary world where supply-chains and the economy as a whole do not rely on availability of a required labour force and free trade.


Brexit is the real culprit

As we all know, shortages are occurring only in the UK and not in other countries, which are also affected by the pandemic.

Yes, there’s insufficient lorry drivers in many EU countries and beyond. However, you do not see empty shelves in any EU country, even in the most peripheral islands of Italy, such as the small Eolian island of Salina near Sicily.

The fact is, the lorry drivers’ shortage is only one of the many bottlenecks created by Brexit in the UK’s supply chain. Many other sectors are affected by the disruption of Brexit, and not only on the labour market but in the availability of goods as well.

Shortages in the labour force and in intermediate goods (such as raw materials or components) are hitting the UK’s economy via supply-side disruption in crucial sectors such as construction, packaging, all transportation methods – including containers in ports – agriculture, food & beverage, machinery, pharmaceuticals, health services, etc.

In other words, the supply chain disruption occurring in UK is systemic and can be blamed almost entirely on Brexit. It is Brexit that created bottlenecks in the labour force and intermediate goods availability.

This is because Brexit reduced the overall availability of all three main elements of an economy: (1) human resources, (2) goods as a mean of productions and (3) capital – both in terms of fixed investments and financial means.


It is a Brexit-trap resulting from the conditions the UK is now experiencing. By closing borders to labour supply from other EU countries, Brexit has hampered key-industries relying on EU workers to solve critical shortages which already existed.

But this is not the only way the Brexit trap is working. In fact, Brexit is progressively disrupting trade across the Channel resulting in shortages of necessary intermediate goods to keep the UK economy running. Within a historical perspective, the UK is self-inflicting the same harmful wounds it suffered during World War I and World War II: when access to European economies was partially or fully blocked.

It is not simply the shortage of 15-20,000 EU lorry drivers which is harming the UK economy but the combination of all elements composing the supply-chain.


Long term view: why the UK government is wrong

Should this path not reversed, within a few months the UK economy is going to shrink. UK GDP is already failing to recover from the pandemic crisis. In the first quarter of 2021 it fell by 1.6% and in the second quarter increased by only 4.6%, compared with a cumulative loss of around 10% in 2020.

All of this is due to Brexit trapping the UK economy in a trickle-down effect. Business cannot sell unavailable goods and will be forced to fire employees, even within a labour-shortage environment. In turn, consumers will not buy for fear of financial distress.

National wealth, or GDP as a wealth-producing stream, is doomed to contract as well. Christmas time will not help, as the situation is pointing to very bleak shortages hitting the economy exactly in December 2021, when most businesses rely on a yearly bonanza. UK GDP in the third and, especially, fourth quarter of 2021 are already set to be at disappointing levels.

By blaming pandemics or other scapegoats, the Government and the UK economy are at risk to be trapped in a downward spiral which will be difficult to turn around. The sooner UK citizens act to change government, the better.