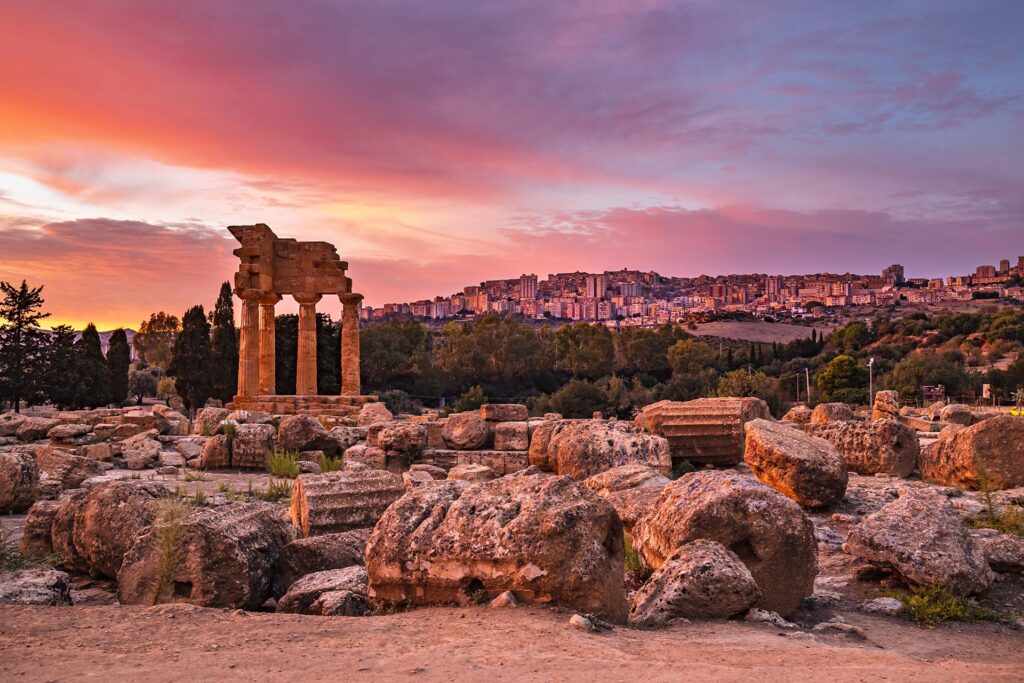 “Without Sicily, Italy creates no image in the soul: here is the key to everything”.

Goethe was one of the greatest writers of all times and all nations. He was termed “the last universal man to walk on earth” and one of the most tragic and profound souls of humanity, the author of immortal works such as The Sorrows of Young Werther, The Elective Affinities and Faust.


He came in Sicily with the painter Christoph Heinrich Kniep, who made sketches and drawings that will deliver to posterity the powerful images of a Homeric Sicily, as Goethe saw it. A “key to everything”, beyond the memory of visual memory.

Goethe loved the classicism of Sicily. He did not care about the Arab-Norman cathedrals. He detested other Sicilian buildings, such as the “horrid spectacle” of the architectural complex that the Prince of Palagonia, Ferdinand Francesco II Gravina Cruyllas and Alliata had built in his gardens. For him it was a museum of monstrous statues, absurd and repugnant. (Villa Palagonia is considered, nonetheless a wonderful palace in the outskirts of Palermo).

In Sicily Goethe looked for the serene grandeur of classical art, the beautiful ideal, the noble simplicity, as he did for other places of Italy too. But, out of his immense work, let’s talk just about his stay in Agrigento.

On 23 April 1787 Goethe arrived in the then Girgenti, the old name for the city Agrigento in Sicily until XX century, from Sciacca after a day of walk.

Goethe saw the thermal baths, tasted their salted water with the smell of sulfur, saw the convent above the hill. He was very attentive to the rocks – the limestone fragments, the yellow marble and flint of the Platani river, the chalk of Montallegro. He was fascinated by

A “preticello” (a little priest), guided him and Kniep to visit the city and see the well-built streets, the cathedral. He admired the bas-reliefs of the sarcophagi.

In the house where they lived, separated by a curtain from the rooms of the landlord, they saw the thin fingers of maidens preparing macaroni of “strong grain”: a snails-shaped type of pasta. And then they tasted and ate them for the first time, exquisite and delicious. In Agrigento, Goethe stayed four days. While criticizing the haste of the guide, he had the chance to appreciate the beauty of places that Christoph Heinrich Kniep drew with scruple.


In the Valley of the Temples

Goethe and Agrigento was a love story. He was conquered by Agrigento, by its spectacular Valley full of gardens and vineyards, with its famous Temple of Concordia in the background and the ruins of the Temple of Juno and other temples, the enraptured eye “sloping rapidly towards the coastal plain to the south, which for another half hour of road stretches to the shore of the sea”.

Kniep drew a ruined temple of Juno on a crumbling rocky bump, while Goethe reconstructed with his mind the imaginary line of the walls behind which the temples had been built. He admired the slender line and beauty of the Temple of Concordia that had withstood for centuries, but deplored the lack of taste – the use of white plaster, for example – of the attempts to preserve the temple and other monuments.

He measured the triglyph – more than two open arms – of the colossal Temple of Jupiter, resting like a giant skeleton, a pile of rubble, admired and asked Kniep drawing the other temples and monuments, the Temple of Hercules, which still left “traces of the ancient symmetry”, the Temple of Aesculapius, “shaded by a beautiful carob tree”, the Tomb of Theron, the graves of well-deserving citizens in the rocks and the massive walls of the ancient city of Agrigento – Akragas.


Goethe and Agrigento: botany and agriculture

Goethe was also very attentive to the methods of cultivation. He wrote about the way of seeding fava beans, or making soap by burning the stalks of the fava beans and the shells of the almonds. He wrote about the order of rotation for crops, beans, wheat, tumenia. Tumenia: a wonderful, summer wheat that ripens in three months.


“A wheat that does not need abundant rain, but strong heat.” “The wheat is sown in October and November, and by June it is ready for harvest.” In short, he had “peasant” precision, even though it may seem elementary to us.

Goethe wrote about flax and the “superb leaves of the acanthus,” of the sainfoin growing on the uncultivated hills, about oats, cabbage, figs, almonds and table grapes, abput artichokes and raw broccoli rabe. He noted that the land of Sicily in Agrigento’s district  is not very rich in birds. Only quail and birds of passage, nightingales, larks, swallows, of rhynnas and ridennas lived in Agrigento’s  ourroundings.

Goethe was a very keen observer, a man with vast interests. He made observations of great acuity in architecture, paintings, restoration technics, which arouse wonder even to contemporary specialists.

Goethe collected stones, volcanic ashes, lapilli. He was fascinated by plant species that can grow only in the temperate climate of Italy – almond trees, olive trees, vines, the uprising colors of Sicily, and then the lentisk and hawthorn, aloe and clover, rhododendron, borage, garlic. And, of course, lemons and oranges.


The guide led him through the surroundings of Girgenti. Who knows? Maybe – I like to think – he entered the territory of my city, Palma: homeland of “The Leopard” . Though he left no evidence of this possible excursion.

In fact, his stay in Sicily lasted forty days. But he will write the book “Italian Journey” almost thirty years later, between 1813 and 1817 when the great German had already burned a large deal of notes. No problem, though. One of the greatest men of all times lived Sicily and remembered it like a dream. Forever, and for everyone.

A dream that – as soon as pandemic will be over – can be replicated and lived by anyone today, maybe with his book as a timeless guide. Thus enjoying the richness of European continent of yesterday and today at the same time.

On cover, the “Tempio dei Dioscuri” in The Valley of Temples” nearby Agrigento. Photo from Facebook page ‘Valle dei Templi’.