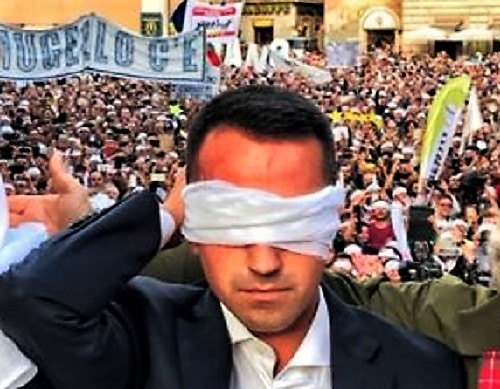 Mr Di Maio (pictured), a 31-year-old politician of Five Stars Movement will probably lead talks to form a new Italian government – his party having won 31% of the vote in Italian general elections. The Five Stars Movement clearly won the national vote under a mostly proportional system. It is way ahead of any other party.

Nonetheless, the new rising star of Italian politics will have a very difficult task in forming a new government, as a majority seems beyond reach without getting post-election allies.

True, the centre-right “coalition” as a whole will have a higher number of parliamentary seats. However, that seems also short of majority and not enough to form a government excluding Five Stars Movement or a defeated Democratic Party. In addition, the centre-right coalition includes a quarrelling group of fellows, ranging from xenophobic and anti-Europe Northern League (17% of vote), to the Berlusconi’s battered Forza Italia party (14%) and a small extreme right anti-Europe party named “Brothers of Italy” (4.5%).

The incumbent centre-left pro-Europe Democratic Party (PD) has been badly defeated, collecting just around 20% of the vote, down from 29.5% in previous elections. Main leaders of PD already declared to accept an opposition role. The Democratic Party’s leader, former premier Matteo Renzi, resigned from party’s leadership right after election results were clear. Much more unclear is the direction that Democratic Party will undertake in the near future. That will be decided in a dramatic party congress to be held shortly.


Finally, extreme left party of former-communist “Free and Equals” barely entered the parliament with a handful of seats (3.4%). A few other small parties did not manage to enter the Parliament, including the pro-Europe Emma Bonino’s “+Europa” (2.5%).

Main Italian newspapers, such as La Repubblica, have considered a possible government with Five Stars Movement and a Democratic Party not anymore led by Mr Renzi.

From any angle, the picture is extremely fragmented, especially after a toxic electoral campaign developed even beyond hate-speech, episodes of violence, and political formations launching furious attacks on each other. Worse, the electorate preferred parties showing highest degrees of toxic speeches.

Italy’s public debt is currently around 130% of GDP. The country narrowly escaped a large financial crisis a few years ago. A partial redress of Italian economy is underway thanks to centre-left governments now punished by an electorate lured by other parties’ political platforms. In particular, the Five Stars Movement has been campaigning on distribution of easy money from the blue sky. An attracting proposal for Southern Italy’s electorate.

No wonder here too. Five Stars Movement was created by comedian Beppe Grillo a few years ago with the motto “Fuck-off”. As disturbing as it might seem, much more upsetting has been years of propaganda based on insults to any politician not belonging to the now winning Movement.


Di Maio largely won in Southern Italy on a bill of distributing some 800 Euro a month to every unemployed. That is, a few million people would receive a skyrocketing social-support bill with no clear conditions and proceedings to avoid pure inflation-igniting effects. Implementing this proposal alone could bring the country on the brink of bankruptcy.

Unfortunately, the entire political platform of Five Stars Movement is extremely costly, not very rational – it might include anti-vax bills – and utterly unclear. It seems to be largely drafted by blind adventurers driving a broken car on a bumping road.

To add insult to injury, the only real option to form a majority government for Mr Di Maio seems to pull-in also Salvini’s Northern League into an executive, via an anti-immigration and anti-Europe mandate. Despite social insults, electoral campaign proposals of Five Stars Movement have been contradictory and vague enough to attract any other party and single MPs into government sphere, including xenophobic and trade-wars adventures promoted by Northern Leagues. It might also attract “Free and Equals” and dissatisfied Democratic Party’s MPs, at least on some populist proposals, if not the majority of a newly directed Democratic Party.

Five Stars Movement has been anyway campaigning on a platform ambiguously closer to Northern League. In particular, Salvini’s Northern League proposed a “parallel currency” to substitute for Euro currency – even as a “means to pay taxes” – plus a 15% personal income flat tax. More worrisomely, he proposed a national “hunting” of any immigrant “from home to home”. Five Stars Movement, on its side, campaigned for a referendum to leave EU on Monday and reassurance to remain in EU on Tuesday. Positions of Five Stars’ candidates toward immigration ran from xenophobic to unfortunate comedian-style jokes.


Salvini’s speeches often resembled to a toxic “ethnic cleansing” propaganda. He performed a theatrical “oath on Gospel ceremony” in a rally in Milan during electoral campaign, posing as a medieval “Black Pope” calling for crusading against Islam. Not surprisingly, he wrote his own “gospel” version cashing on his first name, Matteo (Mathew). The book went largely sold across Italy especially in the North where his electoral base is getting larger and larger. Style and arguments are not far from Di Maio’s Five Stars Movements. Eventually, they are both perceived as the “winning stars” of these elections, performing well beyond expectations.

The clear winner is, Mr Maio and Five Stars, though.

Sadly, Mr Di Maio has no experience in government, even at local scale. He never obtained a University degree and has clear difficulties in properly managing Italian language, let alone English or any other foreign language, or maths, history, economy, medicine and geography. MPs of his Movement declared in the past to believe in the existence of mermaid, chemtrails and other fakes and conspiracy theories.

To be fair, going from comedy to tragedy might be easier than expected for Italy.