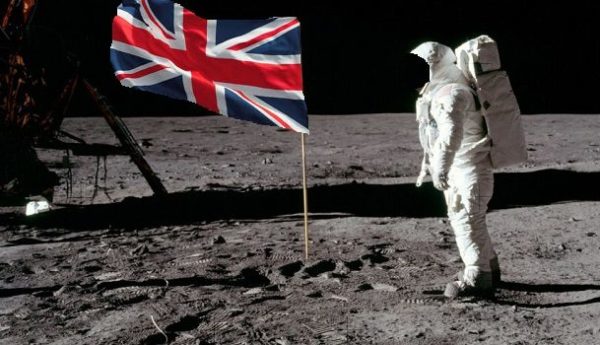 Brexit... Walking and diving in the moon. What a splash!

You can always approve a decree affirming that the moon does not exist anymore. You can also pass a decree imposing that Great Britain is now on the moon and not in Europe anymore. The moon and Europe will remain there nevertheless.


Theresa May and her government do not realize that. Instead, they are going on: walking on the moon without an oxygen mask.

It is not coming as a surprise that negotiations between the UK and EU are wandering in the dark. Especially in trade, a gigantic jam is coming out from the rare atmosphere of that moon –  where Mrs May and Mr Johnson decided to jump.

Boris Johnson is continuing to sell the fake story of getting back £350m a week after leaving the EU. From the moon? From Saturn? Maybe from Polyphemus, who got just one eye? And went drunk in the meantime?

Yet, Mr Johnson is still claiming that much of this imaginary money would be spent on the NHS. Reality is that exiting trade agreements between UK and EU is a huge jam, even assuming cooperative talks.


And talks between UK and EU are not in a cooperative mood. Ironically, the attitude of brexiteers remains on the moon. Quarrels, not talks, should them be named. Especially since Mr Johnson jumped back on brexit-domestic politics with all his imaginary dust.

The Italian MEP Gianni Pittella, commented: “Boris Johnson is embarrassing his country once again by repeating the lies of the Leave campaign. He is jeopardising the Brexit negotiations by threatening to turn the UK into a low-regulation economy. And he insults the intelligence of the British people with his tub-thumping jingoism. It is more in keeping with Trump Tower than Whitehall”, reported The Guardian.


After all, “Half of my task is running a set of projects that make the NASA moon shot look quite simple,” Britain’s Brexit Secretary David Davis said by the end of June 2017, according to the BBC.

The facts are, Great Britain is not on the moon, yet. Polyphemus is not the EU’s negotiator. And we are not yet drunk on Sunday evening. Maybe May and Johnson are? Suffocating, indeed. Especially with no oxygen mask.